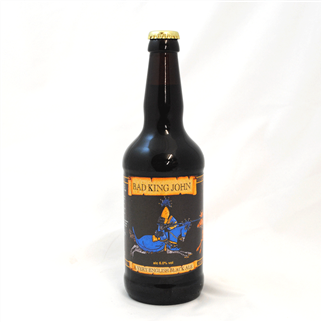 There is an old style tapestry design on the front of the bottle portraying two knights jousting and on the back there appears to be a medieval wench being hanged. Charming. Nice olde English design though – very apt given the name of the brew.

The beer has quite a sweet, malty nose and it pours very dark. Not quite a jet black standard stout colour but not far off.

For a bottle conditioned ale I expected Bad King John to retain a nice head but within a minute or two any semblance of head had dissipated completely. The carbonation was on the low level so when coupled together it was quite disappointing.

Having tasted several similar UK dark bitters around the 6% mark I expected a familiar malty, sweet, treacly taste and what I got was long those lines but quite understated. It certainly wasn’t an in-yer-face assault on the taste buds which made it quite easy to drink but not very memorable.

At 6% abv it’s certainly at the high end of the alcohol scale for a dark English bitter but the alcohol level doesn’t feel out of place and much like the rest of the character of the beer it sneaks up on you rather than providing you with something to shout about.

Not a bad ale but not one that I will be actively seeking out again in the future.