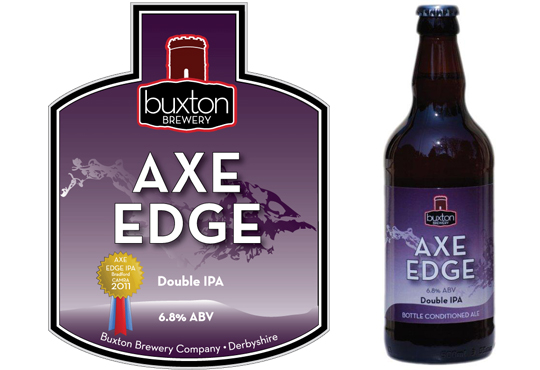 Axe Edge from the Buxton brewery is one of the flagship beers that they currently produce (along with Wild Boar) and is a strong double IPA at 6.8% ABV. It is available on cask or in bottles (our review is of the bottle conditioned variety) and it takes a not too subtle inspiration from some of the big hoppy American IPA’s that are thankfully hitting our shores from the West coast US.

It is very heavily hopped, using Amarillo, Citra and Nelson Sauvin but there is also an element of maltiness in there which gives it a nice complex tastebud tickling oomph.

It pours a honey, amber colour with a fluffy white head that clings to the glass. Many would be hard pushed to distinguish between a cask and bottle serving of Axe Edge – the condition of the bottled ale is that good.

As soon as the bottle is opened you will immediately experience the aroma of refreshing tropical fruits. I found pineapple and grapefruit to be particularly pervasive. The nose isn’t overly powerful, but you can certainly tell which type of hops has been used to get such an effect.

Having tried both the cask and bottle conditioned Axe Edge I can say that the Axe Edge from the bottle is extremely agreeable. In fact it is extremely similar to cask, if a little less creamy.

There is a delicate carbonation to the ale and a powerful bitter sweet citrus rush from the first gulp. The fairly subtle nose of tropical fruit doesn’t prepare you for the complex taste of tart pineapple, grapefruit and lemon with a very slightly sweet orangey taste. The finish is distinctly dry which gives it a very drinkable quality.

At nearly 7% ABV it is certainly not a session beer for most, so be careful with this one because although you are aware of the strength after a few gulps it is so drinkable and gently warming that this beer could tempt you into one or two pints more than is sensible, so be warned!

Axe Edge is simply one of the best bottled real ales I’ve ever tried. There really are genuinely no flaws that I can find with this ale, from the aroma, appearance, drinkability, and strength. It is an example of the renaissance in quality English brewing which deserves (and is receiving) wide ranging plaudits from around the world. If you are lucky enough to find this on cask, which I’m sorry to say many of you won’t, or you find bottles for sale in your local emporium of fine ales then treat yourself, you won’t be disappointed.