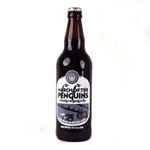 March of the Penguins is from a brewing company from which I have never had the pleasure of drinking any of their brews before so I have been looking forward to sampling the quality.

The bottle itself is branded very nicely. It has a modern, slick design which the brewers have clearly given some time and effort towards.

Understandably for a stout it pours jet black and is slightly above average carbonation for a stout. It has quite a frothy off-cream coloured head upon pouring which is retained through drinking.

It has a pleasant toasted malt barley flavour which is very reminiscent of Titanic stout (which is no bad thing by the way) and has very subtle chocolate notes. At nearly 5% ABV March of the Penguins has a higher level of alcohol than most UK standard stouts and you can definitely feel the extra alcohol whilst drinking.

The bottle suggests a spicy, fruity finish with ingredients such as coriander and orange zest. Unfortunately these are so subtle as to be completely unrecognisable in my mind. I think the write up is an attempt to allude to a complex range of flavours which in my opinion doesn’t quite stack up. The overriding flavour is that of roasted malt with little else. This is certainly no negative as toasted flavours are what make a good stout but the notes belie the experience of drinking the brew to this reviewer.

The Williams Bros Brewing Co which is proudly based in Alloa as the bottle denotes is not a brewery that I’m familiar with and is probably the first self-proclaimed “microbrewery” ale that can be picked up in one of the largest chains of supermarkets in the UK, but based on the evidence of their March of the Penguins I hope to try more of their ales. A fine stout indeed.